If there was ever a time to deny the separation between “town” and “gown” this appears to be it. Once upon a time, perhaps, there was a mystical land where Ivory Tower academics could stand free and clear from the complications of social life. And up in that glorious Tower they could wear tweed jackets, smoke from pipes, drink a dram of Scotch whiskey, and write research papers no one would read. Fortunately, that Tower–and the gendered, racist expectations of who got to reside in it–has collapsed (or nearly so). The integration of social life and our academic institutions now has an opportunity to grow and create new ways of contributing to a just and worthwhile human future.

One current endeavor that both reveals such possibilities and the current limits of them can be seen in the No Justice, No Robots petition. The authors and signatories of the letter reject the militarization of the police and accompanying threats this poses, in particular to people of color. They desire “(1) legislation requiring state and local governments to acquire informed public consent before acquiring robotic technologies…(2) advocate for policies that decrease police departments’ ability to acquire robotic technology, and that instead work towards community health, education, and affordable housing; and (3) where police acquisition of robotic technology cannot be curbed, advocate for appropriate training in the use of such technology, and for policing strategies that are oriented around community-oriented policing.” In accordance, the signatories (1) refuse to work with law enforcement agencies in their research, refuse funding for projects are intended for use by law enforcement, and (3) “pledge to petition our universities to divest themselves of all ties with law enforcement agencies that demonstrated brutality, prejudice, or white supremacist tendencies.”

The desire to inoculate robotics research from police brutality is particularly interesting to me because in researching Apocalyptic AI I spent time at Carnegie Mellon University’s Robotics Institute and talked with researchers there about military funding. I initially wondered whether there were academics loathe to accept military funding due to the pretty obvious questions about the global deployment of U.S. soldiers and the use of military action as a wing of U.S. economic and policy moves. As it turned out, there were some researchers who objected to military funding but most found that whatever work they did could be put to either military or civilian use and regardless of who funded it the military would use what they were going to use–and so folks may as well just take the military money. I briefly discussed the question of military funding in an appendix of the book and I also wrote a separate essay on military robotics. 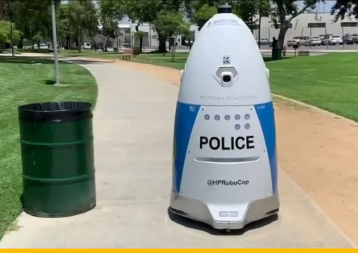 I should return to the current petition. There are roboticists who don’t want association with unjust police projects. The list, I’m afraid, is not long (I am not a signatory, of course, because I don’t think I am the sort of “robotics researcher” that they had in mind in writing the letter). The list includes only a very few tenured or tenure-track faculty members. Of them, I recognize a few names involved in projects (e.g. educational robotics) that wouldn’t receive military funding anyway. So, why is it that a moderate number of students have signed, but not their faculty? And why have signatories dried up even among students? In particular, however, I think it’s fair to ask whether their faculty oppose the movement for better policing and a more just society? The answer: probably not.

I suspect that a lot of faculty felt they couldn’t sign such a petition, not just in protection of their own research but in protection of their students. Of course there’s the practical problem of figuring out how to vet academic/law enforcement collaborations to ensure the just use of technology. And that’s a real problem. In addition, the same logic that keeps researchers take military funding even if they oppose unjust military action would remain applicable in this case. But the real issue might be how one is going to fund one’s graduate students if one cuts ties with the funding sources. All this is to say the politics of funding can be very challenging. For a researcher who believes that his or her students and their collaborative work will bring about a better world, taking a stand against law enforcement might be hard to do.

The more powerfully we can rewrite the relationships between academic and social life, the greater our opportunities will be to intervene effectively. We need a relentless pursuit of justice to run rampant through academia, one that goes beyond empty verbiage and sloganeering and devotes itself to concrete action. Whether practical in the current environment or not, the No Justice, No Robots petition is a welcome contribution to increased awareness of our interconnected world and the potential for academic institutions to help humanity progress toward a better world.