In writing Deities & Demigods (and its precursor, Gods, Demigods, & Heroes), James Ward exposed millions of role-players and curious readers to the study of comparative mythology. A few years ago I wrote in an online essay (“Monstrous Futures“) that the Advanced Dungeons & Dragons Monster Manual is the most important bestiary ever composed. But at the time I didn’t mention how important Deities & Demigods and its successor, Legends & Lore, had been for me and countless other D&D players in thinking about religion. Mr. Ward’s delve into myth and folklore introduced us to the wide variety of human religious work and had a seminal, if generally unknown, impact on our culture. I think The Monster Manual was the world’s most important bestiary and that Deities & Demigods (combined with Legends & Lore) is the world’s most significant investigation and popularization of comparative religion.

Admittedly, Deities & Demigods gets things wrong and many of these errors are easy to note (such as conflating all Native American traditions into one pantheon).

More significantly, the book omits many of the world’s religious ideas and practices. This means that while readers learned something about Hinduism, for example, they learned nothing of the world’s monotheistic traditions. The book unfortunately omits religious systems from Africa, Oceania, and elsewhere, and there are significant errors that bear correction. But monotheism seems to be the biggest lacuna of the book. Perhaps there are no monotheistic traditions because these don’t play easily into the book’s classification scheme (greater gods, lesser gods, demigods, heroes…all written up in a style reminiscent of The Monster Manual). That the book ignores these and engages living traditions of polytheism (e.g. Hinduism and Native American traditions) is obviously a problem…it smacks of colonialism and implicitly judges the merits of religious traditions. A product of its time, I deeply doubt Mr. Ward intended for the book to feel disparaging to living religious traditions. I’m guessing the classification scheme ran the show (but perhaps also reticence to get involved with traditions that had a strong and vocal presence in American culture…D&D had enough trouble with Christian authorities in the U.S.–which you can read about in Dangerous Games by the scholar Joseph Laycock). 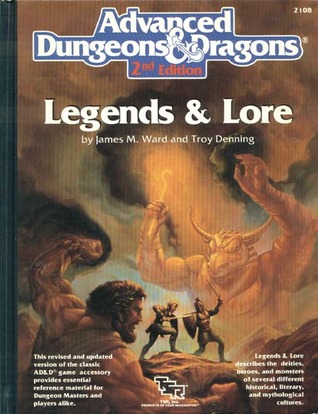 Nevertheless, Mr. Ward introduced thousands (hundreds of thousands? millions?) of gamers to the wide breadth of religion and myth and the strength of its classification system is that the book provides a way (however problematic when compared to empirical reality) of thinking in comparison. What are the powers of a greater god in Celtic mythology and how do these compare to those of a greater god in Aztec mythology or Egyptian mythology? How strong, exactly, was the god Modi and how do different traditions treat the end of the world? Mr. Ward writes that he spent a summer digging through the library and that he relied heavily on James G. Frazer’s classic account of myth and religion: The Golden Bough. Modern scholars have found numerous errors in the facts and argument of Frazer’s work, but the book is so significant that it remains in publication and still gets discussed by graduate students in the study of religion (I did so in the spring of 2001). Mr. Ward’s reworking of that material provided an unprecedented way for readers to think about religion and mythology.

One thing I think scholars of religion would find interesting is to know that Frazer’s 1890 publication had a dramatic impact on the world of role-playing games and the lives of gamers. Perhaps someday an interesting work of history and literary analysis could unravel the threads of influence between anthropology, archeology, comparative religion, and the rise of RPGs.

But I think scholars might also like to know that America’s most widely read (and in that sense influential) scholar of comparative religions wasn’t Eliade or Smart or either of the Smiths or anyone else that they would likely think of when asked. It probably isn’t Frazer or Campbell either, despite their long influence on the general public. If you calculate eyes on the page (especially the hours and hours of solitary contemplation that we gamers applied to Deities & Demigods), America’s most influential author in comparative religion is probably a former history and English teacher … and gamer. Thanks for your work, Mr. Ward!

p.s. I am aware that the scholars cited in the last paragraph are mostly not American. By “America’s most…” I mean the one with the strongest influence on the U.S., regardless of whether that person was born in the U.S. or ever lived here.

Cover art from Deities & Demigods and Legends & Lore was created by Erol Otus and Jeff Easley, respectively. Copyright is probably owned by Wizards of The Coast, LLC. I didn’t ask permission to use it, but I think this is fair use and anyway, I hope they’ll be nice to me. 🙂