Just recently, I had the wonderful opportunity to discuss my book, Temples of Modernity, with Dr. Raj Balkaran who runs the New Books in Hindu Studies podcast. He was a truly gracious host, giving me far more time to talk than I probably deserve. I had fun with the conversation and look forward to it going live, but there’s one part of the conversation that’s been dwelling with me: he asked me who would be most interested in reading this book of mine.

My first answer was that I wrote it for myself and then I had to bumble my way through some other possible categories of people who might care.

When we pitch books to publishers we get asked who might be our intended audience because the publisher wants to know what the likelihood is of the book actually selling any copies. And of course my book proposal came with some thoughts on that: grad students and faculty in the areas of religion, science, & technology; anthropology of science & technology; contemporary India; religion and politics; that sort of thing. But it’s essential to note that book proposals are written for their own audience: book publishers. So, I now wonder whether what we write for book publishers maps well onto what we are writing vis-a-vis readers. Who are the readers and are they the people we tell publishers they will be?

I very much would like scholars of contemporary Indian society to read the book, be they investigating science & technology, religion, politics, or something else. Anyone interested in those listed domains would almost certainly find something in the book that’s interesting or insightful or worth arguing over. And despite the absurd price tag (apparently designed exclusively for Euro-American libraries to purchase…I tried and failed to get them to offer the Kindle version at a reasonable cost with the price of failure being that no one has bought or will buy the Kindle edition), I hope a few folks will get their hands on copies and read the book. But who else might like a book?

When I wrote Apocalyptic AI, I wrote with the intention that scholars would go get copies: religion, science, & tech; science studies; contemporary apocalypticism; artificial intelligence & society; those sorts of things–a pretty big tent because my work is pretty odd and latches onto a lot of things I find interesting. But I also wanted people who were basically like me: people who are interested in robotics and AI, maybe dabblers in programming robots, maybe more-than-dabbling, maybe just into thinking about whether we should have empathy or legal rights for robots. Same thing is true when I wrote Virtually Sacred: I hoped that gamers would want to read the book. It turns out that gamers are much more invested in reading websites: the book got featured on WoW Insider (now deceased) and GameSpot (and I was thrilled!) and there were hordes of comments about the book…but that week I sold exactly one copy of the book on Amazon. So, apparently even though there are literally millions of people who share my interests in role-playing games (there’s some stuff about that in there), videogames, and virtual worlds, and thousands of people saw that the book exists, none of the everyday folks in those domains wanted to shell out $30 for a book on them. The Kindle edition is quite a bit cheaper…so none of them wanted to spend $10-15 on that or $5 for a used hardover either. 🙂

It can’t be just because the cover art is terrible (which is largely my fault…I wanted to get Bruce Jensen–the absolute genius behind the cover art to Neal Stephenson’s Snow Crash–to provide the art and he offered to do so at an extremely reasonable rate but for a variety of boring and regrettable reasons I didn’t cough up the money. So instead of having something evocative and awesome I have an underwhelming bit of stock imagery that I’ve regretted basically since the publication of the book. I think my publisher for that book, Oxford, would have covered part of the cost and then I should have shelled out the rest. The regrets of past mistakes! But surely that cover can’t be the main reason for dull sales to the consumer market. 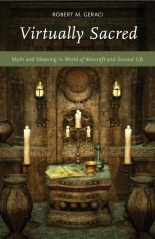 Some kind of lesson must be apparent here. Obviously, I write books about things I find fun and wondrous. And then I hope there will be people who want to join that conversation with me. Apocalyptic AI is available in nearly 750-1000 libraries worldwide (exact counts are tricky without a lot of manual labor); so that one certainly resonated with some folks. Happily, I have a follow-up book coming out sometime soon. While approximately the same number of libraries purchased a physical copy of Virtually Sacred as Apocalyptic AI (about 250-300), the latter is available as an electronic book at a huge number more than the former. In addition, I still sell copies of Apocalyptic AI on Amazon but very rarely sell copies of Virtually Sacred. It probably doesn’t help that World of Warcraft and Second Life, for all their importance in the history of 21st century gaming culture, aren’t hugely popular right now and those are the main subjects of the book. But there are millions of potential readers there and few picked up the book.

The strange and tricky thing is figuring out whether we’re alone in the things we find interesting and–if not–figuring out who shares those interests enough to read a book about them.

You can, of course, get Temples of Modernity for a large fistful of dollars at Amazon.

One thought on “For whom the author writes”